May 18, 2020, 11:18 amComments Off on One dead after Canadian Snowbirds aircraft crashes into home in British Columbia

At least one person was killed and another seriously injured Sunday when a Canadian Forces Snowbirds aircraft crashed in Kamloops, British Columbia, according to the Royal Canadian Air Force.

“It is with heavy hearts that we announce that one member of the CF Snowbirds team has died and one has sustained serious injuries,” the RCAF said on Twitter, adding that more information would be available shortly.
Capt. Jennifer Casey was identified as the deceased victim. She was the team’s public affairs officer, according to a press release from the National Defence Canadian Armed Forces. 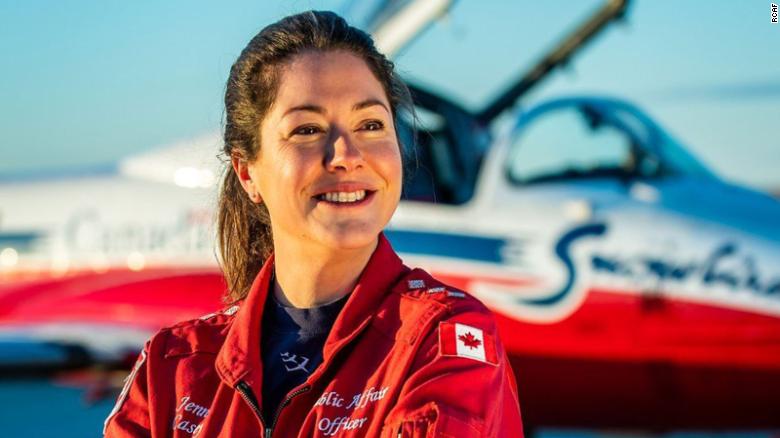 Casey was from Halifax, Nova Scotia, and joined the Canadian Armed Forces in August 2014 as a direct entry officer, according to her RCAF biography. Prior to that, she had been a broadcast radio reporter, anchor and producer in Halifax, Nova Scotia and Belleville, Ontario, the biography said.
“To the family of Captain Jenn Casey we send our condolences, know that she was an inspiration to many and she will be missed,” said Gen. Jonathan Vance, Chief of the Defence Staff for the Canadian Armed Forces.
Capt. Richard MacDougall, the pilot of the aircraft, was injured in the crash and is being treated for his injuries, the Canadian Armed Forces release said.
Authorities first received reports around 11:42 a.m. (2:42 p.m. ET) that a Snowbird plane had crashed into a residence on Glenview Avenue in Kamloops, about 150 miles northeast of Vancouver, according to a statement Sunday afternoon from the Royal Canadian Mounted Police.
The Snowbirds perform air shows for the Canadian public, similar to the US Navy’s Blue Angels.
The team — comprising members of the Canadian Armed Forces and National Defence Public Service Employees — kicked off a cross-country tour May 2 to honor “Canadians doing their part to fight the spread of Covid-19,” according to a statement on its website.
“Canadians look at the Snowbirds as a source of joy and an exhibition of the incredible feats that our people in uniform are capable of,” said Harjit S. Sajjan, the Minister of National Defence. “Operation INSPIRATION was intended to lift the spirit of Canadians at this difficult time and the Snowbirds accomplished their mission. I know that all Canadians grieve this tragic loss.”
The RCMP and other safety and regulatory authorities are investigating what might have caused the crash.
“This was a tragic scene that had a huge response from emergency vehicles, not something you would expect you would expect in the middle of a long weekend in Kamloops,” said the city’s Mayor Ken Christian.
The military indicated they are sending an investigation team to Kamloops, Christian said.
“In the meantime the ‘Birds’ are grounded here in Kamloops,” he said, adding that he had spoken by phone with Prime Minister Justin Trudeau and Defense Minister Harjit Singh Sajjan.
Anyone who might have filmed the incident is asked to contact the Kamloops RCMP.
“My thoughts are with the brave members of the (Royal Canadian Air Force),” Trudeau said on Twitter.

I have been in touch with @HarjitSajjan about the @CFSnowbirds crash in Kamloops, BC. My thoughts are with the brave members of the @RCAF_ARC. The CAF will provide an update as soon as possible.